I know, I know, it's been a while since I've updated my blog.  Apologies for that!  You've asked, "Have you been painting every single day???  Is that why you haven't posted?"

I'd love to claim that yes, I do paint every day, and tell you that my powers of concentration are unsurpassed.  I'd like to drivel on about discipline.  "How does she do it?" you'd ask, awed.  I'd gloat, and yeah, pretty much be insufferable.

But now, my friends, I will pass along a secret.  The Successful Artist business model is based on one thing alone: Living within your means.

In other words, sometimes the noble paint brush must acquiesce to the noble duty of manual labor.  Being your own plumber, landscaper, construction dude, and overall caretaker will save you gazillions.  Gazillions that you should reinvest in art supplies and a sweet road trip.

I offer the following...

Exhibit A:  This is the ancient crawl space that supplies water to the whole crazy compound and its equally crazy inhabitants.  I've spent waaay more time down there than I care to think about.  Frozen pipes, wild leaks, blown fuses, dead pumps, an asthmatic pressure tank ~ you get the idea.  Emergency plumbing trumps everything!  Yes, even painting.  The helpless female thang was never my forte, and plumbers charge a fortune.  Besides, who wouldn't want to descend into a raccoon infested pit brandishing a pipe wrench and a flashlight? 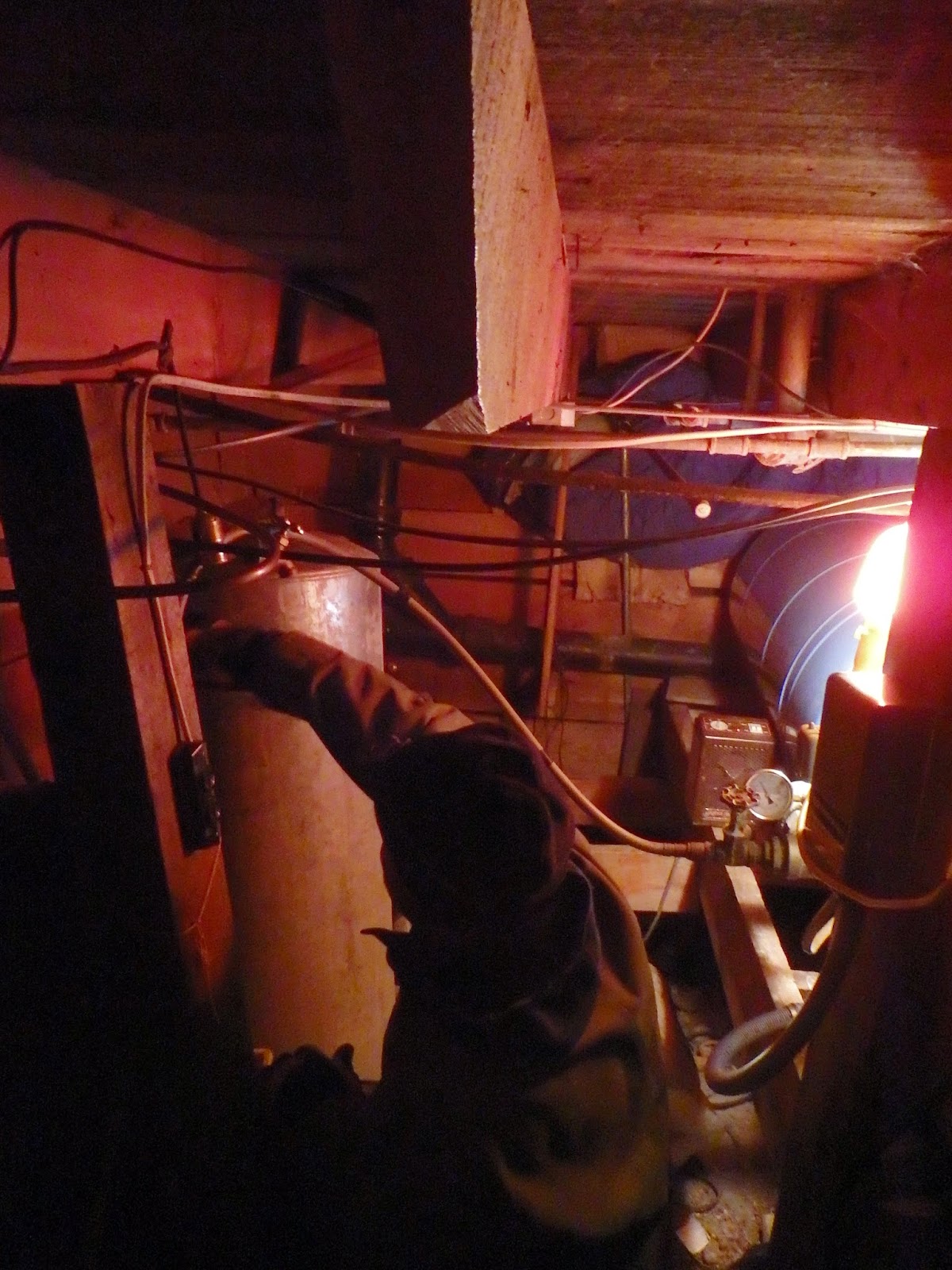 Exhibit B:  Pickax vs. paintbrush.  Occasionally, it's necessary to dig a ditch.  A live electrical line had lain across the path for about 2 months.  Despite the usual hoofing between cabins and the rain, no one got electrocuted.  We dug a deep trench, which posed new dangers, and there was a certain amount of bickering over who was more adversely affected by the ordeal.  So, in a neighborly fashion, we stubbornly left it open for a while, but no one fell in.  Cheated death again!  Back to the easel... 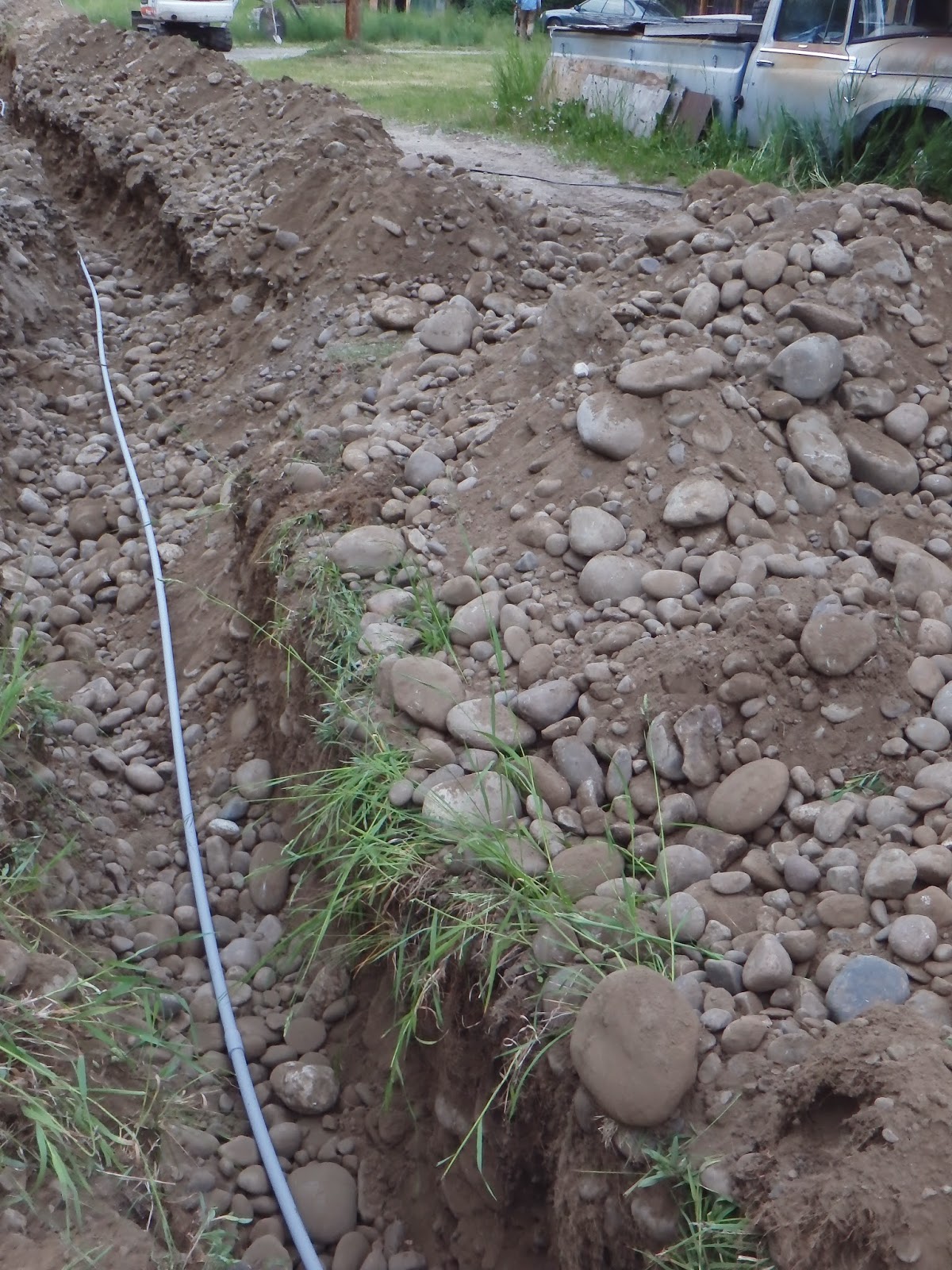 Exhibit C:  Snow.  While it's true that artists demand consistent studio light, 7 feet of snow blockading the windows for an entire winter is not desirable.  The cats get crabby ~ how can they keep surveillance?  Neither backhoes nor a burly manservant named Thor are justifiable expenses, so I shovel out by hand. 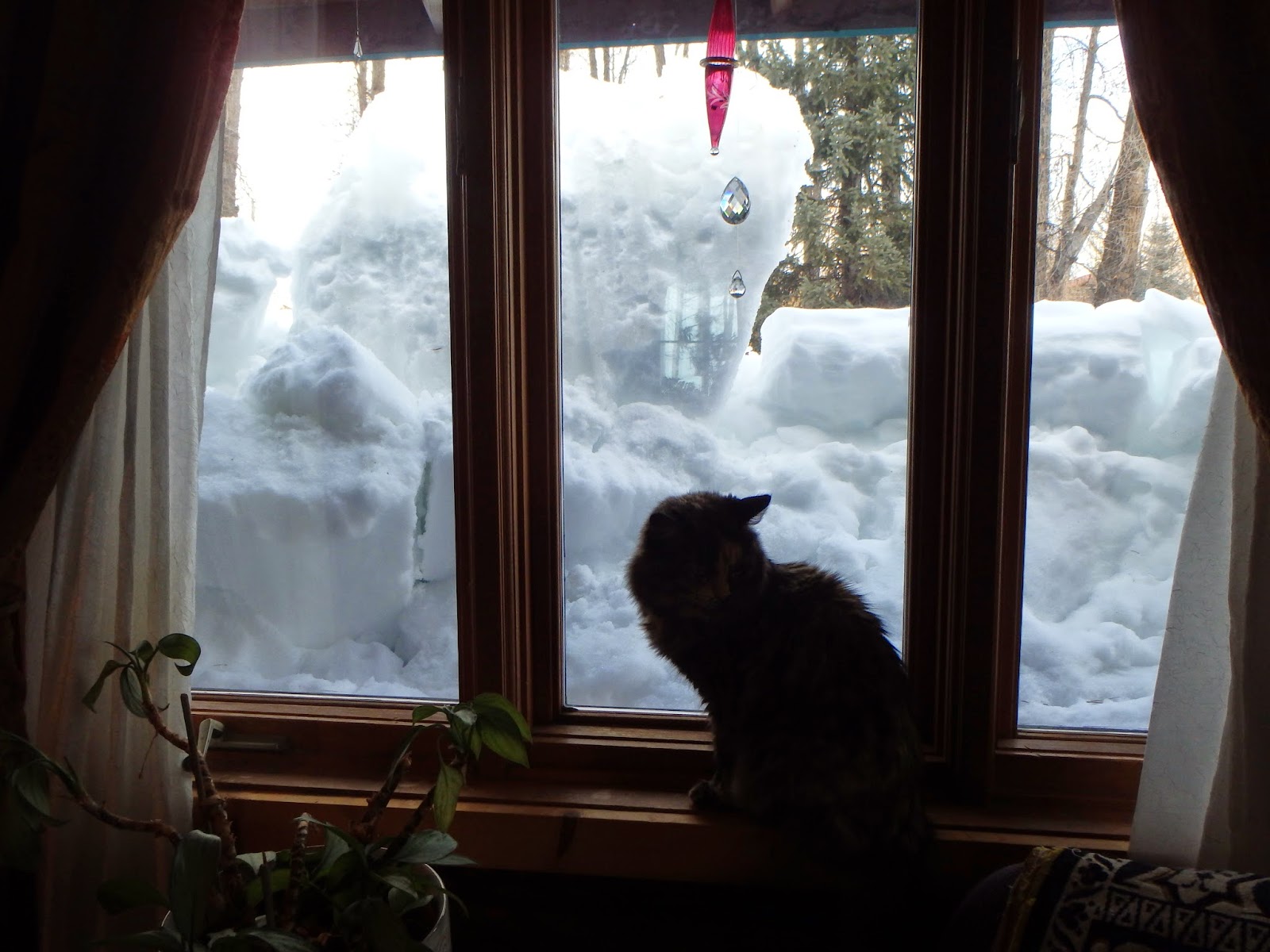 Exhibit D:  More snow.  Okay, so I ignored the warning signs, but I was at the easel, enrapt with an Old World  donkey whom I'd met in Marrakesh, and as far as I was concerned, I was in Marrakesh.  When 20 tons of snow slid from my roof, it felt like a magnitude 8 earthquake hit the cabin.  The cats levitated and scattered in all directions.  Oblivious to the ramifications, I continued painting.  When the temperature plummeted later, I couldn't keep the stove lit.  Upon inspection, I discovered this: 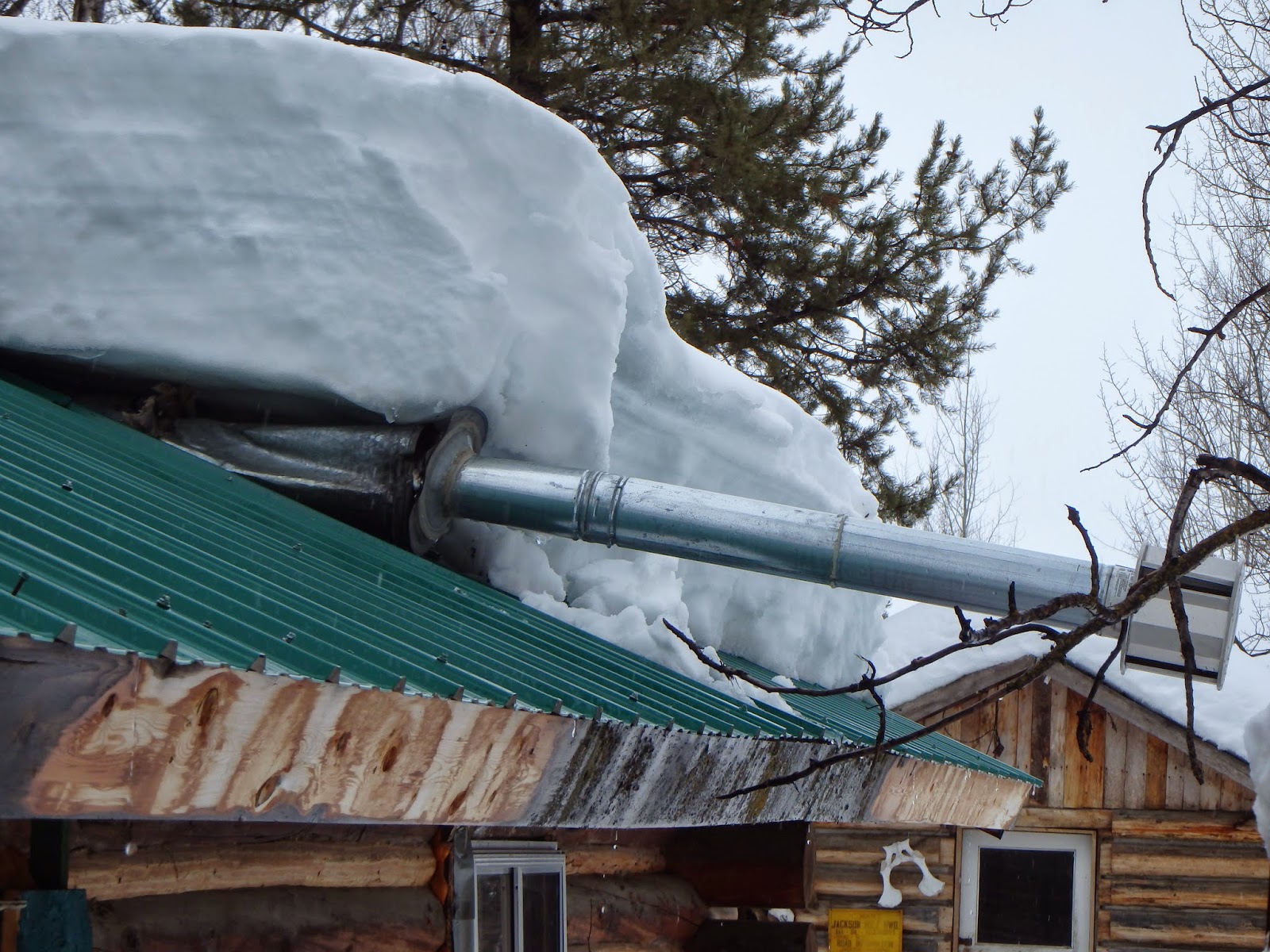 Huh...  That's a new one.  I called for a meeting of the minds.  The neighbors waded around getting snow in their boots, agreeing that it sucked to be me.

Had this been an all inclusive resort, the maintenance guys would've appeared in an official golf cart, wearing polo shirts.   They would've placed warm towels on my aching forehead and rubbed my shoulders.  With pleasing accents, they'd have consoled the cats.  I'd have had heat within the hour.  This was not the case, mainly because this isn't an all inclusive resort.  Just think how much I've saved in HOA fees!

Head throbbing, I stomped inside and set up space heaters.  Back to the easel...

A few days later, we were all feeling the love: 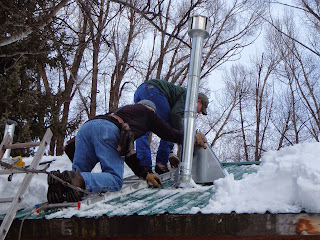 Exhibit E:  Another tip:  Give up that pricey membership at the club!  Get your arse behind a lawnmower, a wheelbarrow, a shovel or rake.  Trust me, the fresh air and sunshine will do you good.  Consider it free cross training. 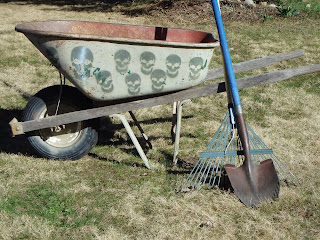 Just think of the possibilities ~ Be an artist, create a sense of well rounded fulfillment in your life, AND save eleventy million dollars a year!  Livin' the dream, baby, that's what it's all about.

(Please stay tuned for my next scintillating installment, which will actually include PAINTING.  In the meantime, my friends, keep those brushes squiggling.)

The Catapult Of Success

Here it is, by popular demand:  The Uppity Chick Studio Art Blog.

You're probably wondering what tremendous skills you'll garner here that will propel your paintings to blinding success.  Me too!  As you've no doubt discovered, The Catapult Of Success is notoriously fickle.

A self made businessman once told me that if I had a $3,000 clothing allowance, rather than buy twenty outfits on sale, my best investment would be a single Chanel suit.

Eric B. Rhoads has said that artists must present themselves as successful in order to become successful.  Think about the car you drive, he says.  Think about the clothes you wear.  If you ooze success, people will take you seriously.  You're selling an image, a reputation.  People are more apt to buy your artwork if they believe you're an investment.  "Hmm, yes, I just acquired an original E.C. O'Connor.  Really, darling, you should see it, it's brilliant."

Okay, look, here's the deal:  Facades aren't my thing.  I totally do NOT have a $3,000 clothing allowance.  Mascara makes me nervous.  For decades I drove a '91 Nissan 4wd pickup truck, manual transmission, primer gray on one side where the blue had corroded away, and I freakin'  loved that thing.  Now I have a Toyota Tacoma.  Camping and painting gear fill the back - it's my mobile studio.  I have boldly gone to places no white woman has gone before.

So all I can tell you is the truth.  About me.  About my art.  About how I live.

Given a choice between a Chanel suit and a sweet desert road trip, I'd invest in the road trip.  Every painting sale is validation. 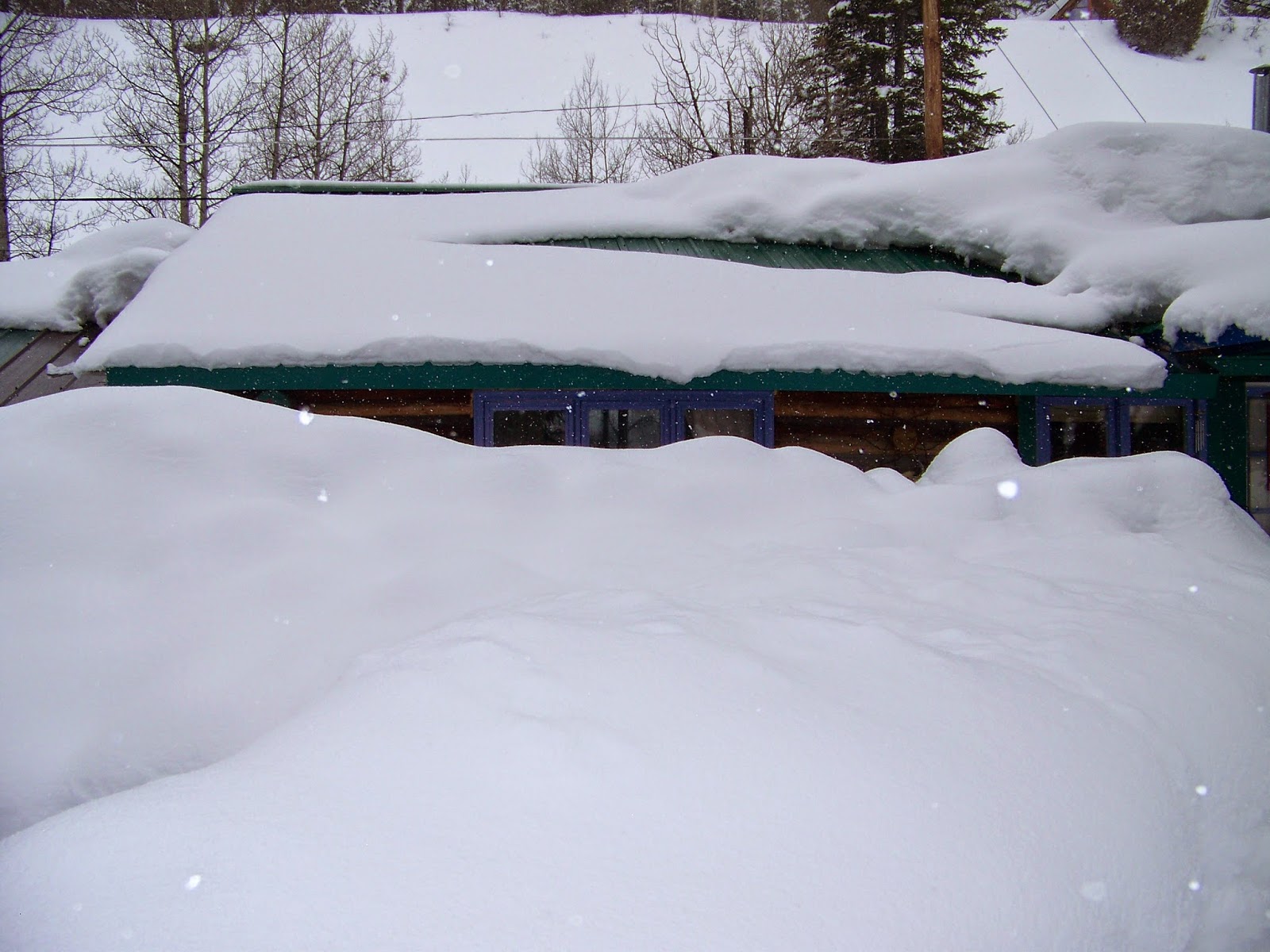 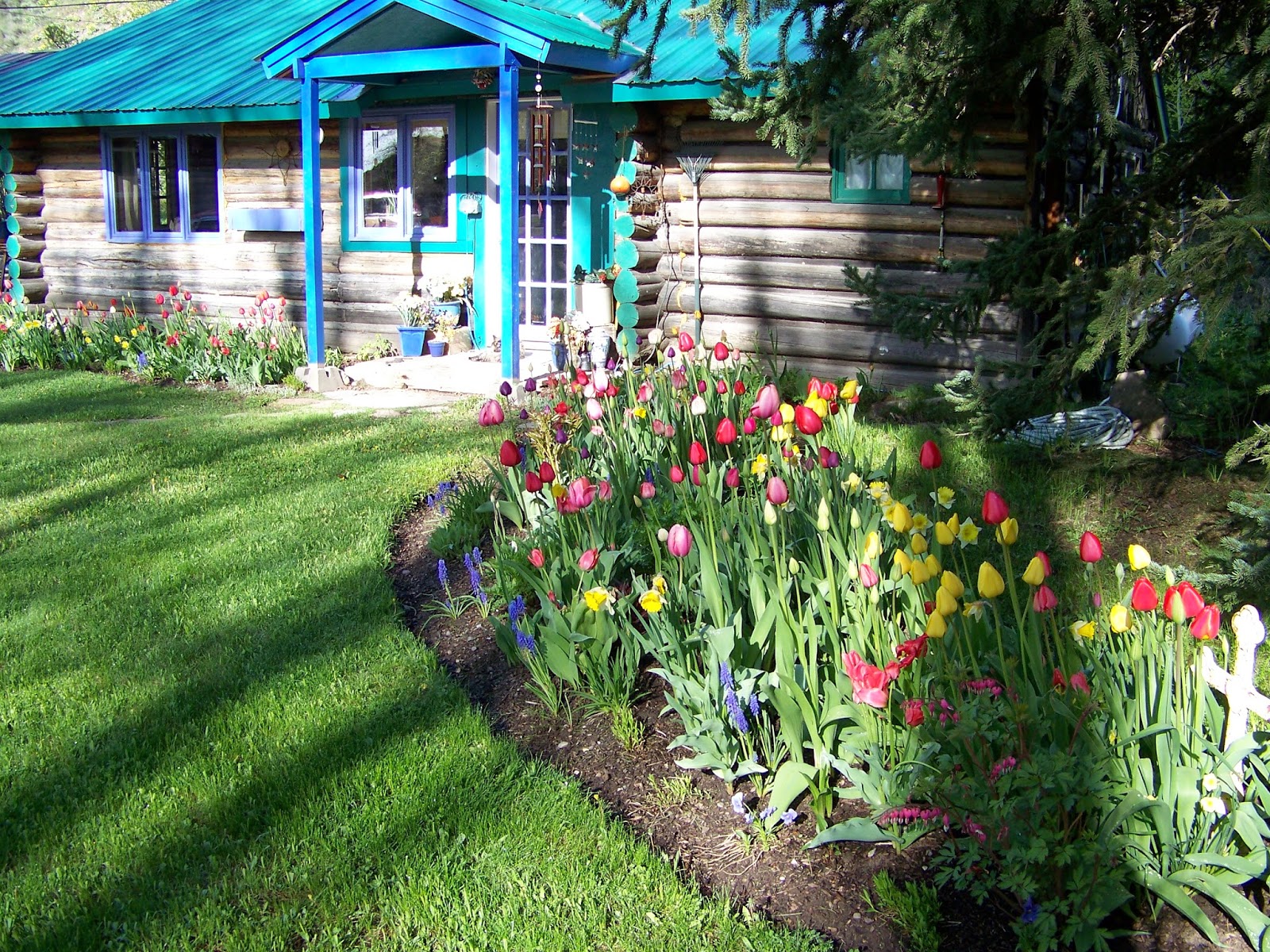 Uppity Chick Studio World Headquarters is a 400 square foot, one room log cabin of admirable decrepitude.  Hey, at least I have running water (didn't used to).  Come winter, I'm buried.  Come summer, I'm in heaven.  Either way, the advantage of living in a small house is that there is no escape from my artwork.  The paintings dominate my existence.  For example, I have this nifty drying rack in my kitchen; recently I learned that it's called an oven, and other people actually use theirs to cook food!  Crazy.

For some reason, people think I have more cats than I really do.

My cabin is one of several on a rambling property that served as an old hunting camp.  It took a long time before proper grammar arrived in the west: "ONE BLOCKs horses Sportsman's Lodge CABINS " reads the sign nailed to an outbuilding.  Charlton Heston lived here while filming The Mountain Men (no kidding).  Now it's me, an eclectic array of neighbors, and various roaming wildlife. 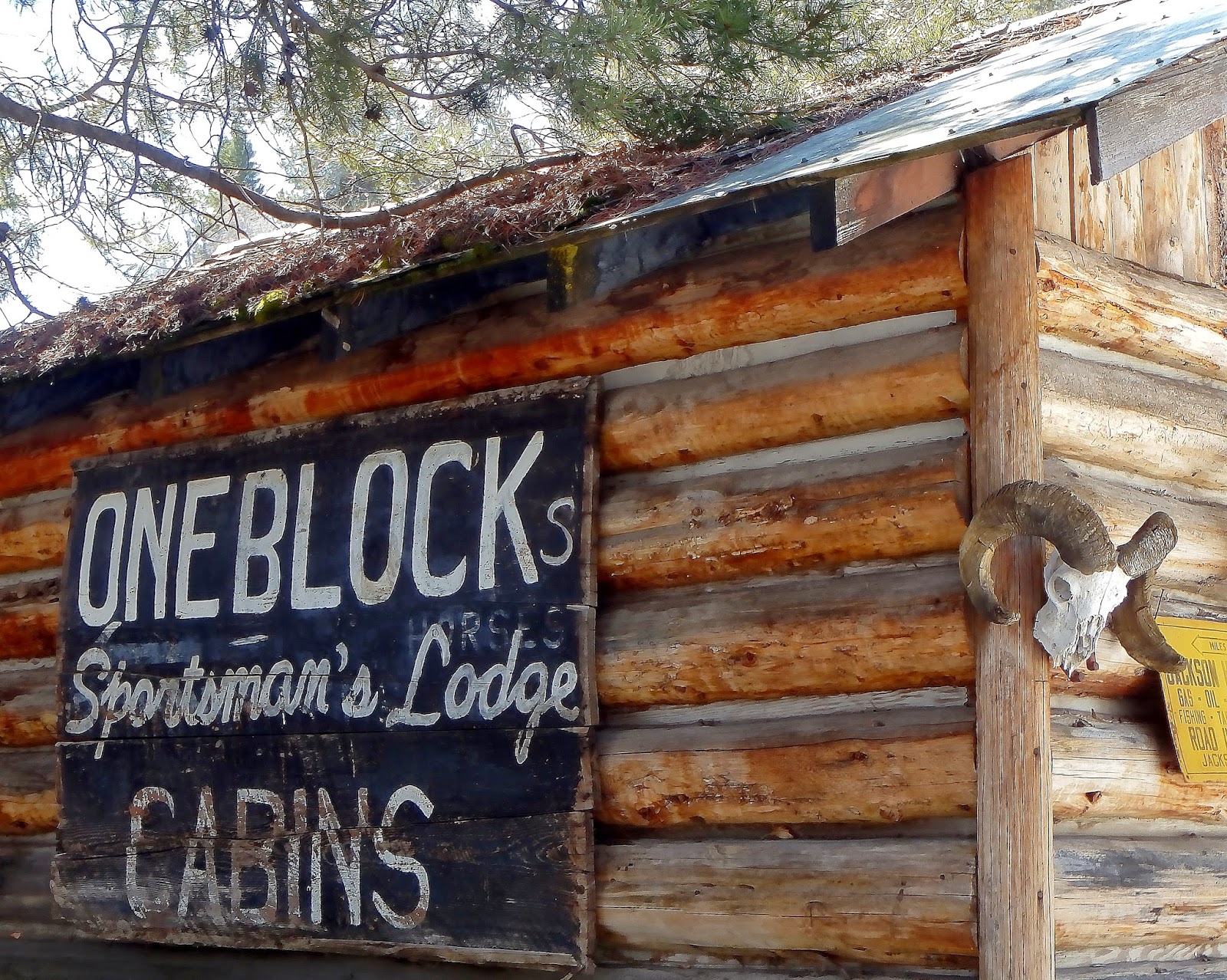 Silk purse?  Sow's ear?  Yes; both.  If you're not happy with what you have, how can you be happy with more?  Maybe one day it will be all the rage to have a decaying outhouse in the back yard.  Maybe fleece and Smartwool will be haute couture.  Maybe prestige will be measured by the distance cadmium red has traveled across one's possessions.  When that day comes, The Catapult Of Success will be mine!

(Don't tell anyone, but I'm actually very well behaved.  I have an image to cultivate, after all.)